I thought I would also post this today, beginning of August!
Crap! Does time pass by f aster as you get older??
Or is the Earth turning faster than before? xD

I made this wallpaper sized 1680×1050 with calendar and Yu’s 24th B-day
all marked and really, with cheesy Japanese scribble by Amy included~~~

Also, hopefully… in two weeks time, YAM005.
If you haven’t read previous YAM issues, do so over here. 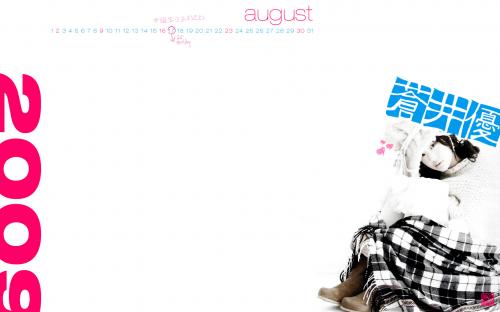 This is what’s happening~

Everything I know or get from product photography, I “got” as a kid watching Discovery Kids when they showed a clip of how the photoshoot for a sandwich – complete with pinned-lettuce, strategically placed ketchup, soaking-wet cheese, raw-yet-well-done-cold burger and silicon-sprayed buns – and of course~ the ice-cream cup which was filled with silicon squares, and a some other squishy-plastic-like product… so the ice-cream wouldn’t melt, you know?

I also did some “product shooting” in my school days, but really… wasn’t my thing.

But look at this! It’s almost so SO real, except the fries… but still.
O.O CRAZY!

Motionographer made a post on the nominees for
Best Main Titles
(yes, motion designers can win Emmys too)

Of course, my favorite one (and crossing my fingers for its win) is
The United States of Tara… because!
I love pop-up books… the level of detail in it,
the style… and I also loved the theme.
it gives you the proper idea of what the show is,
it evokes the show and the style.

Forget the Film (or show), Watch the Titles also had
a special on the titles for United States of Tara~
as well as True Blood, and Taking Chance

Lucky Thirteen – Watch Over Me

First, a little about the video.

I began this… when this episode (Lucky Thirteen) aired back in Oct. 2008 – so it’s been sitting on my computer forever. I worked on it one weekend, and sort of left it there – until this weekend. I’ve begun working on another music video (on a less fan-made side) and thought I should at least finish this one.

I found Thirteen (I refuse to call her Dr. Hadley or Remy LOL) interesting from the beginning. It was a certain spark, and well… Olivia Wilde is pretty hot – which my friend Mob would be glad to agree on. And I also have to say that I’ve always found Foreman boring, so Foreteen makes me roll my eyes.

That aside… the song is by Hanson from The Walk, and it immediately brought images of Thirteen and her out-of-control behavior, so I just had to do it.

On a rant side… YouTube has removed already 2 of my fan-made videos, and I’m expecting them to remove the ones that are left, so I’m now forced to not use it. So please help out by linking back to this site =D

Someone I know did one of those silly FB test application things on numerology, which made me revisit mine. As you probably know, I did a bit of numerology back in my fandom years – which was pretty accurate, if I may say so~

Anyway, here is mine as a quick result ;)
with links after the break, so you can quickie check yours too~