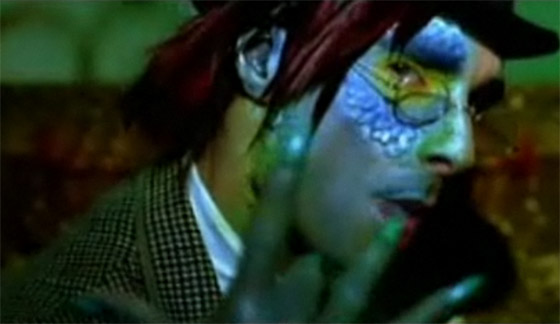 Joseph Kahn’s style is predominantly strong in color palettes, and very varied in genre. I think he’s the only director who’s worked with various countries musicians such as the English band Muse (Muscle Museum), Puerto-Ricans Chayanne (Candela) and Ricky Martin (Juramento) — both in Spanish, Spaniard Enrique Iglesias — in Hero and Heroe, and even South Korean super pop star BoA with I Did it for Love. Yes, the Kahn has done it all in genre from South Korean pop, to Latin baladas… Nu Metal with Korn, Country with Faith Hill, Electronic pop with Moby, Hip Hop with Busta Rhymes, Rap with Eminem, Altern Rock with Garbage, girl R&B with TLC and Destiny’s Child… and the best of pop with Britney Spears. The Kahn’s done black and white with Sugar Ray’s Someday, just as he uses strong and strict color schemes in this fine video by Destiny’s Child’s Say my Name.

In DC’s Say my Name, possibly the most recognizable music video by the-then-group-turned-trio, the whole concept of the video has the girls barely moving in the short cuts of colored settings that match their outfits our highlights their outfits.

Of course, Joseph Kahn’s biggest feature is probably being able to push Britney Spears through each pop music hoop. First, it was Stronger which came in between the first two singles of Oops I Did it Again and Lucky, and her last single Don’t let me be the Last to Know. Then, it was followed by the hit Toxic which literally turned her into a common choice by DJs in clubs around the world.

And of course, the Kahn was in charge of putting Britney back on the map with Womanizer. He has continued working on music videos for the now-iconic… but looking-freakishly-weird-in-a-somewhat-normal-setting Lady Gaga for Eh, Eh (Nothing Else I Can Say), Maroon 5’s Misery, and Eminem’s Love the Way You Lie.

Wanna check out a little more on his videography? Check out the YouTube Joseph Kahn playlist. And look! LinzerDinzer TV had a special on the Kahn and his MV for Love the Way You Lie.