The Oscar Goes to… Europe! 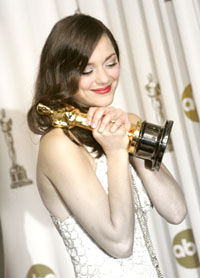 Academy Awards are over, and here comes a new year waiting. But I must admit that the big winner of the night was Europe. All 4 acting awards went out of the continent:

Art Direction went to Dante Ferreti and Francesca Lo Schiavo (Italy) for Sweeney Todd, a co-production of the USA with the UK. Makeup went to France with La Vie en Rose, while Costume Design went to Elizabeth: The Golden Age, a UK/Germany/France co-production.

Moreover, the big technical prizes went to Europe as well. Golden Compass got the Visual Effects nod, a UK/USA co-production. While The Bourne Ultimatum, a US/Germany co-production grabbed the awards for Film Editing, Sound Editing and Sound Mixing.

UK/Poland won Short Film Animated with Peter & the Wolf, and France once again dominated in the Short Film Live Action with Les Mozart des Pickpockets. And Juno, that apparently is a USA/Canada/Hungary co-production. x’D

The biggest happy announcement for me was hearing Marion’s name! I went nuts over it, and had me teary. I first thought Marion had Oscar written all over her face when I got to see La Vie en Rose in Sweden. It was such an amazing experience to have watched it with Julyssa, and it’s even more amazing that we both felt the same. That Marion HAD to win.

During the night, there wasn’t really any upsets. I guessed 18/24 of the categories, and felt that the most bitter surprise during the ceremony was I Met the Walrus loosing Best Animated Short. Because, really, motion graphics rock my world. While, Tilda Swinton and The Golden Compass winning were good surprises.